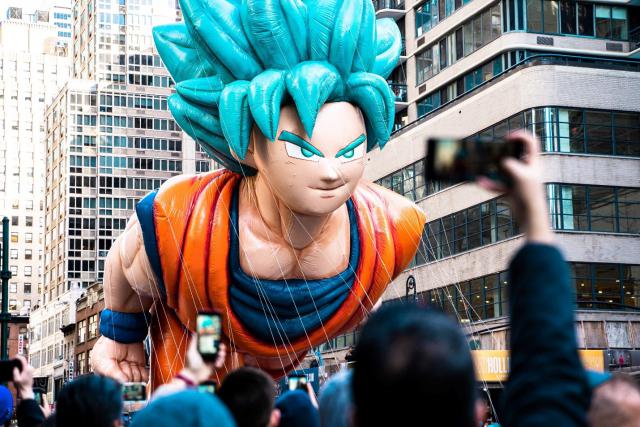 How Macy's Creates The Biggest Thanksgiving Parade In The World

Macy's might make it look easy but they're parade production studio dedicated 364 days of the year towards constructing balloons and floats for one special day on Thanksgiving.

A Thanksgiving tradition that takes place in every home across the country isn't just cooking and eating delicious turkey but enjoying the world's biggest parade. That's right, Macy's Thanksgiving Day Parade is back for 2021 and they're planning on a massive celebration.

This year will mark the 95th annual Macy's Thanksgiving Day Parade since the first one in 1924 and grows in popularity every year with over50 million viewers. Workers at the Macy's Parade studio includes animators, painters, carvers, and many other experts are working 364 days for the single day of magic working over 50,000 hours to bring the parade to life.

Macy's Parade 72,000 square foot production studio is in Moonachie, NJ where the over-the-top parade floats start as a sketch, then engineers render a digital model with a special program to test the integrity of the structure. The famous balloons have a similar creative process starting with a 3D digital file, then the file is sent to a 3D printer to create a scale model and the same file is processed through another program to create fabric patterns.

Each year the costume department designs and creates over750 new costumes for patrons involved in the parade. There is a total of 4,200 costumes featured in the parade designated by a design team and maintains thousands of looks that are parade perfect.

Macy's Parade production studio consists of carpenters, welders, sculptors, painters, and technicians that work around the clock to build the massive parade floats. The parade floats are made with some common materials such as blocks of foam, wood, metal, and paint that can take three to five months to complete each float.


The metal shop is used to create the frame and internal rigging that will be the base of the float as the woodshop works on the base and sets pieces to create the float. Characters featured on floats are hand-crafted by the sculpture studio and each piece is painted one at a time.

Floats featuring any kind of movement are sent over to the animation shop to get the right internal structures and mechanics for the perfect float. The production studio uses over 300 pounds of glitter annually on floats, costumes, and more.

The massive character balloons are a multi-step process starting with a custom-made fabric that is cut to shape and heat-sealed together, ensuring there are no leaks that can cause the balloon to not inflate properly. After the fabric is seamed together, the balloon is inflated and painted by hand to match the design for the final product.

Before everything is packed away for transport to the streets of NYC, everything is checked and labeled as "Parade Ready." Once the materials make it to NYC, the balloons are prepped the day before the event that is pumped with air contained by nets to prevent them from flying away.

Each float is limited to the dimensions of 8.5 feet wide and12.5 feet tall to be able to travel through the Lincoln Tunnel on its way to the set-up point. Some floats are deconstructed by the display team and reassembled after going through the tunnel as they can measure up to 30 feet tall. The night before the parade, all the floats are reassembled by the team with assistance from a crane.